Despite the harassment by Wave and Iris, Cindy has has some progress in the last few weeks. As far back as two weeks ago, Cindy allowed me to pet her ten times in a row! This happened while playing. She is not very food-motivated so play is the way I try to get close enough to touch her. She starts purring when I pet her! She doesn’t allow this every day, though.

Cindy also is starting to make friends with my smallest and youngest of cats, Pearl. Pearl chases Cindy and bats at her, same as the other kids in the schoolyard here, but she does so gently. Cindy is the most submissive cat I have seen, and she does not fight back and usually goes to her carrier retreat, the latest carrier retreat being in the kitchen. However, Pearl, as soon as she gets to Cindy, basically just throws an arm over her and then lets go, and Cindy looks back and thinks something like, “huh, that’s not a problem,” and stays out.

They both like to play with the same toys–the Cat Charmer felt rainbow ribbon and the Cat Dancer wire with bobble-ing pieces of rolled-up cardboard on it. Today I was playing in the kitchen with the Cat Charmer and Cindy was going nuts. She barely needs me to move it. She looks at it, and pops up in the air, twisting, going a little sideways, with her tail heading in the opposite direction, and drops down batting at it as if it had been trying to combat her all this time.

The cats have been calm this weekend because I’ve been lying around with them–I have a cold.

Here is a picture of Pearl and Cindy next to each other in the window–they’re noticing me so they look a little suspicious, especially Pearl. 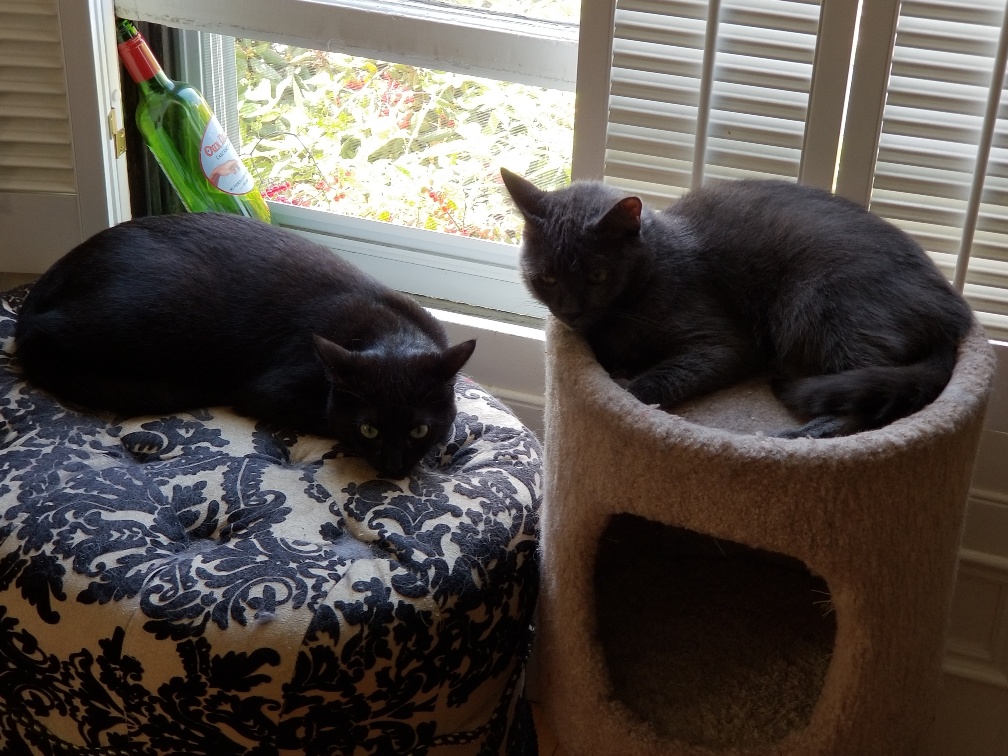