I still don’t know what may have happened during the daytime. I refused to close Wave in the small bedroom even though he goes on the cat tower in there.

Nonetheless, I got to come home at lunchtime today, and Cindy was out. I always feel that thrill of excitement when I see her doing normal cat things, like jumping up on the big ornate footstool I keep by the front window for the cats. I took a picture, but it’s not as exciting to look at as what I was feeling. 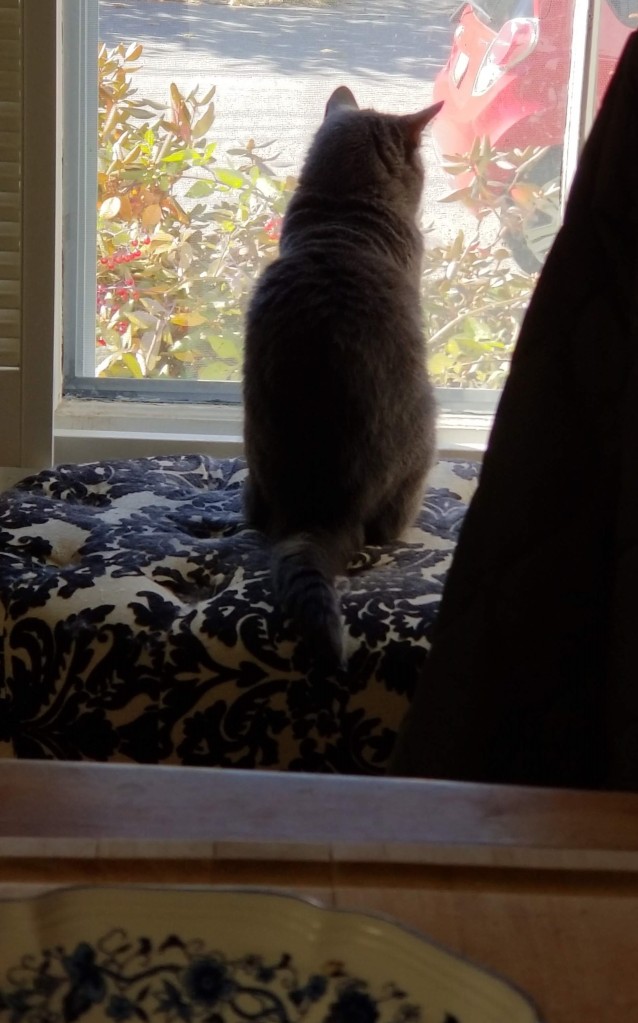 This evening, I came home and Wave was still mostly sleeping. I started doing yoga–oh, my aching left shoulder from my non-ergonomic work desk setup–and the friendly cats love yoga. So does Cindy! She came out of her carrier three separate times and I was able to pet her. She rolled over and started rubbing her back on the rug, like a nut. I always try to film this but it doesn’t quite ever look as dramatic. The action of grabbing for the phone to film puts her on alert. So here’s a close-up still photo anyway.

She wears a concerned expression most of the time. If I was her, I would be concerned too! Not Wave, but my fun, lithe, affectionate little black shorthair Pearl was scaring her today. What is up with this?! I got a great comment from a writer at Katzenworld about using Pet Remedy to help with introductions and I eagerly await a bottle I ordered in the mail.

Cindy’s getting harassed by a small cat, not a big cat. And not only that small cat, but her big nemesis, Wave, forgot about her enough today that she did come out to play. She has an indomitable spirit!